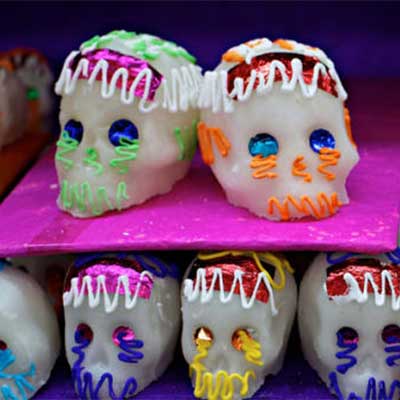 Dia de los Muertos—the Day of the Dead—is a holiday celebrated on November 1 & 2. Although marked throughout Latin America, Dia de los Muertos is most strongly associated with Mexico, where the tradition originated.

The most familiar symbol of Dia de los Muertos may be the calacas and calaveras (skeletons and skulls), which appear everywhere during the holiday: in candied sweets, as parade masks, as dolls. Calacas and calaveras are almost always portrayed as enjoying life, often in fancy clothes and entertaining situations.

Dia de los Muertos is celebrated throughout Latin America, including South America (Brazilians call the festival Finados) and the Caribbean. In the United States and Canada, the tradition exists only in areas with a large Latin American population, such as Los Angeles, California, or Vancouver, British Columbia, Canada. Dia de los Muertos predates the independence of Mexico, the U.S., and Canada.

9 Interesting Things about the Day of the Dead

La Dio de los Muertos, or Day of the Dead, is a Mexican festival that’s becoming more and more popular outside of Mexico. A number of people simply equate it with Halloween in the US and Europe since it falls about the same time. In fact, it has almost nothing in common with Halloween, except maybe a skull motif and the calendar dates. Much like Halloween had a complex evolution in European cultures, so too did Day of the Dead celebrations, which are a fusion of Spanish Catholic and Mesoamerican traditions and beliefs. Here are 9 facts about Day of the Dead that should shed some light on one of the most important annual celebrations in Mexico.

Many of us hear the words “sugar skull” and think of women in elaborate face paint on Halloween. In all actuality, these costumes are just drawing inspiration from a long-standing tradition that’s pretty sweet: candy skulls that are actual sugar. These candies are made from sugar cane, elaborately decorated with vegetable dyes and often stamped with the names of the deceased to be used as offerings at altars and gravesites. Of course, the living also get in on the action and sugar skulls of all sizes, shapes and colors can be purchased at marketplaces. Competitions for the best and most creative designs are common. And before you ask, yes, they also come in chocolate.

Lots of us fear death and in many cultures, spirits are often seen as vengeful creatures that we don’t want to invite back. The Mexican tradition is very different. Mexican views of death are infused with humor, so people often tell funny stories about deceased relatives and friends. Many people believe that the spirits of the departed come back to visit during the festival and are there to celebrate. That’s why Day of the Dead festivities are colorful, lively celebrations, not macabre or scary like Halloween. The belief is that birth and death are inevitable events and both should be celebrated. In some ways, Day of the Dead is actually a celebration of life!

3. The Festival is Actually 3 Days Long

Even though it’s called Day of the Dead, the festivities are generally spread out over 3 days. The celebrations kick off on October 31, although some people may begin their festivities even earlier. Altars are constructed, food and offerings are prepared, flowers are bought and graves are visited and cleaned. On October 31, children will often dress up in costume and collect candy, although this is a relatively recent addition to the celebrations. November 1, known as All Saints Day in many countries, is celebrated as Dio de los Inocentes or Dio de los Angelitos, which honors recently departed children. November 2, All Souls Day, is reserved for the souls of adults who have passed during the year.

One of the most recognizable symbols of Day of the Dead celebrations is a figure known as la Calavera Catrina, a skeleton dressed in upper class attire from the early 20th century. Catrina was originally drawn circa 1910 by the famous Mexican artist Jose Guadalupe Posada as a critique of indigenous peoples in Mexico who tried to be more European. Catrina was later co-opted into a symbol of class warfare during the Mexican Revolution. Eventually, she became a symbol of the Day of the Dead when Diego Riveria painted her in a mural in 1948. She’s been associated with the holiday ever since and people now buy and make Catrina dolls as part of their celebrations.

5. The Festival Has Aztec Roots

It can be hard to trace the exact evolution of traditions but the Day of the Dead celebrations have a very distinct Mesoamerican flavor. The Aztecs and Mayas, the indigenous peoples of Mexico, celebrated something similar to Day of the Dead, which makes the festival almost 3,000 years old! Their festival took place in the 9th month of their calendar year (approximately August on our calendar) and lasted for the whole month. Offerings were made to Mictecacihuatl, the Queen of the Dead, who is similar to the modern Catrina figure. Skulls also featured prominently in the Mayan and Aztec celebrations. The belief was that spirits were able to travel between worlds and they much preferred to be celebrated than mourned.

6. It’s Celebrated Around the World

Mexico is most prominent in Day of the Dead celebrations, where it’s one of the most important holidays. As Mexicans have migrated to other parts of the world, they’ve brought their unique culture with them, establishing Day of the Dead festivities in other Latin American countries, the US and Spain. The Mexican embassy in Prague, Czech Republic, also holds celebrations. Other countries and traditions also have festivals similar to Day of the Dead. In most of Western Europe and North America, we have Halloween and All Saints’ Day, which are related to the pagan Samhain celebrations. In some Southeast Asian countries, including South Korea, Japan and China, similar festivals celebrating the deceased exist, but happen at different times of the year.

Can you imagine having a slumber party in a cemetery? It would give most of us the heebie-jeebies just thinking about it. But during the Day of the Dead celebrations, it’s not uncommon for friends and relatives to visit graveyards and spend the night. They bring pillows and blankets, and they’re sure to bring a few extra so the visiting souls have somewhere to rest. They’ll clean the graves, make offerings and have candlelight vigils. Then the party begins, with food, music and storytelling. Nobody tells ghost stories though; most of the tales are humorous remembrances of loved ones. Good to know that your friends really won’t let you live down that embarrassing confession you made in 6th grade.

8. Offerings Can Be Strange

Very few of the offerings left at altars for the dead make sense, but all of them have a symbolic meaning. You may see a family leaving a washbowl, razors and soap at a grave, which are meant for the traveling soul’s use after a long journey. Pillows and blankets are also left for the soul to rest on. Sugar skulls, which represent the dead, are believed to be “absorbed” by spirits. Marigold flowers supposedly attract the souls, while statues of Xoloitzcuintli, a dog, are left to help guide the spirits back to heaven when the party’s over. Other offerings include pan de muerto (bread of the dead) and the deceased’s favorite foods, as well as toys for children, pumpkins and alcohol.

While it might seem like fun and games to an outsider, Day of the Dead is actually a sombre, respectful holiday, despite its carnivalesque atmosphere. It might seem counter-intuitive to people from different backgrounds, where the appropriate way to celebrate death is mourning but that’s simply not the case in Mexico. Nonetheless, that doesn’t mean that people throw wild parties or disrespect the dead. In most cases, it’s a time for families and communities to come together and honor the dead, celebrate their lives and anticipate the time when all will be reunited in the spirit world. While spirits in Mexico might prefer partying to mourning, that doesn’t mean they want to be treated as an excuse for bad behavior.